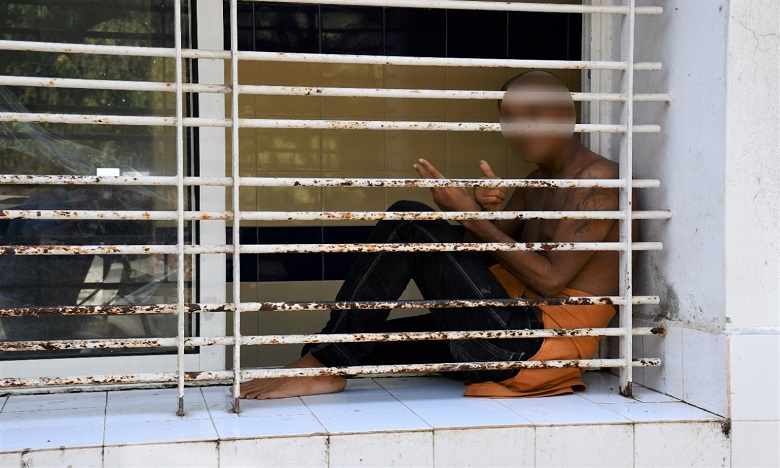 The situation is alarming at the Arrazi de Tit Mellil psychiatric hospital. The 145 patients are cared for by only one psychiatrist. There is a worrying lack of human and medical resources. On the contrary, and with a daily bill of 2,000 DH, patients in private clinics are much better cared for. “Matin TV” visited both types of facilities, not to compare the incomparable, but to draw attention to a sad reality, that of public psychiatric hospitals in Morocco.

Impossible to leave the Arrazi de Tit Mellil psychiatric hospital without being deeply shocked by the situation. The gaze of the residents, sometimes absent and haggard, sometimes suspicious and anxious, speaks volumes about their suffering. Patient X, a 33-year-old married man, father of an 8-year-old boy and a computer graphics designer, is one of them. He has been regularly admitted to this hospital for nearly seven years due to a drug-related illness. Mr. X, who refused to reveal his name, is often interned by his family when he behaves violently. The only psychiatrist who officiates in this hospital, Dr. Khalid Ouqezza, accompanied by some nurses, helps him calm down by putting him first in the pavilion for people at risk. Once stabilized, he is taken back to the sick ward which is prepared for discharge. There he receives the necessary treatment and leaves the hospital as soon as he is satisfied that he is no longer violent. It is within the drug addiction department that he is treated. In principle, this patient’s case requires follow-up of the healing process in one of the few drug addiction centers. If not, his situation worsens and he becomes violent again, then he is taken back to the same hospital again. A vicious circle!

Drug addiction is only one of the causes of psychiatric hospitalization. Dr. Oukezza explains that most of the patients, most of whom are young, are hospitalized due to schizophrenia. A disease characterized by a distortion of thought and perception and a loss of contact with reality. “Today it affects 1% of the population,” according to Dr. Mohamed Hachem Tyal, a psychiatrist and psychoanalyst. Symptoms of the disease appear in adolescence and its management is heavy. Dr. Ouqezza, who is himself the director of the Arrazi de Tit Mellil hospital, tells us that other diseases are being treated more and more within the institute. These include bipolar disorder and anxiety, among others. These patients have difficulty accessing care, despite the efforts of nurses, whose numbers are very small, to optimize the conditions of care for these patients, whose numbers continue to increase.

Lack of conditions conducive to healing
The lack of staff in public hospitals is a reality that renders the management of psychiatric illnesses crippling. But that’s just the tip of the iceberg. Lack of hygiene and activity also complicate the situation. The patient, who should rest in a calm and quiet place, is obliged to share the room and the sanitary spaces with at least one other patient. At least that’s what we saw on the spot. There is also a virtual absence of activity. The hospital has only one game room and one for watching TV.
Contrary to this prison atmosphere that we have seen in the hospital, the private clinic is a paradise that unfortunately is not accessible to everyone. In this facility, each patient is led to perform different activities, which facilitate healing. The clinic also has several specialties. Not surprisingly, the number of patients admitted to this clinic is low compared to that seen in the public. This is quite normal given the high cost of hospitalization in the private sector, which ranges from 2,000 to 3,000 DH per day. A price that Dr. Tyal justifies with the quality of care and the availability of qualified health professionals.

Drugs, another battle
Families of hospitalized patients report the absence of certain drugs at the hospital level, while these should be made available to them free of charge. “My daughter has been suffering from a psychiatric disorder for 7 years and it has been almost three months since she was cured,” worries one mother. Same concern for another mother who must promptly and immediately treat her child because, otherwise, she risks becoming violent. To verify the statements of these two mothers, we decided to visit the premises where the medicines were stored. At first glance, these were indeed available and in large quantities. But what happens then?
The director of the institute, Dr. Ouqezza, explained to us that some drugs are available, but others may actually be out of stock. “The problem is that it is difficult to replace one used drug with another, at the risk of stopping treatment,” he notes. The families of patients approached by “Le Matin” also deplore the high cost of drugs. “Drugs can cost up to 1,000 DH, or even more, knowing that there is an injection that is done per month and it costs between 2,500 and 3,000 DH,” explains Dr. Ouqezza.

Can a psychiatric illness be treated?
Dr. Ouqezza is almost convinced that “when there is a genetic vulnerability or a biological problem, psychiatric illness sometimes becomes chronic and therefore with different efforts one can have a high rate of stabilization, and not of cure, with a follow-up. -up regular to avoid any risk of relapse. For him, recovery is more about anxiety and sometimes reaction disorders, especially as a result of stress or a major problem. Dr. Thyal believes, for his part, that there are solutions to treat mental illnesses, even very serious ones. “It’s not easy, but the solutions are always there”, he notes, before specifying that people who suffer from serious illnesses are stabilized thanks to treatment and most of them can be For him it is essential to give citizens the opportunity to get help in the right environment and with the necessary means and help. Furthermore, the two doctors insist on the importance of involving the patients’ families, who are the most important elements in the care process. Associations are mobilizing for this cause, but much remains to be done.
***************
These shocking figures

Claiming to make mental health one of his department’s priorities, the Minister of Health and Social Protection, Khalid Aït Taleb, announced some troubling figures:
• 343 psychiatrists and 214 psychologists, of which 200 working in the private sector.
• 1,335 psychiatric nurses.
• 16 child psychiatrists.
• 14 social workers.
• 64 doctors trained in the treatment of addictions.
• 197 speech therapists.
• 36 psychomotricians.
These figures are far below the levels needed to ensure the cure of mental illness for a country like Morocco. Access to care remains even more critical if we refer to the latest data revealed by the National Human Rights Council (CNDH), in its 2021 annual report. The latter reports a worrying situation in Moroccan mental health hospitals, whose capacity is only 2,136 beds for 150,000 people with mental illness. A figure that has been growing since 2016, since in four years Morocco has counted 50 thousand new people with mental disorders, according to the estimate communicated on this occasion.
***************
What insurance for the sick?

The treatments and drugs necessary for the care of patients placed under the supervision of a public health doctor are the responsibility of the state, in accordance with the dahir promulgated on April 30, 1959 to that effect. Admission to a private clinic, on the other hand, costs between 2,000 and 3,000 DH per day. According to specialists, this high cost covers the various activities carried out by the clinics to ensure, not only the stabilization of the patient’s condition, but also and above all the healing of the mentally ill. As for the reimbursement of expenses, the reality is shocking: a well-informed source confirms that some insurance companies have started to reimburse hospitalization costs a few years ago, up to a maximum of 40% of the declared expenses. Once the patient’s family members are admitted to the clinic, they are obliged to pay all the expenses and subsequently ask for reimbursement, but the insurance company to which the patient is affiliated must in any case treat this type of pathology. According to specialists, these shortcomings need to be corrected, not by lowering the price of hospitalization in private clinics, but by strengthening the insurance mechanism.

Mental health is often affected by drug and psychotropic abuse. This phenomenon continues to grow in Morocco, in particular due to the illicit activities of traffickers which vary the dangers: LSD, ecstasy, methamphetamines, hallucinogenic mushrooms … Another type of drug that is even more dangerous and increasingly consumed by young people is the nitrogen oxide, usually used in anesthesia, surgery and dentistry as an adjuvant. This colorless gas is sold to young people near schools in gray metal capsules. The effects it causes are very rapid: a feeling of euphoria, laughter, uncontrollable laughter or a dream state. A few months after the start of consumption, effects such as gait disturbances are observed in young people. It is necessary to recall in this regard the efforts of the authorities of the Directorate General of National Security to combat this scourge.